If you’ve been paying any attention at all to the latest and greatest ways to manage information, then you’ve certainly heard of Microsoft SharePoint. The latest in a long line of Next Big Things from The Most Interesting Company in the World (“stay computing, my friends”), it continues to receive an unprecedented amount of press and general attention, and to this observer’s eye, it is too-often lauded as The Answer to All Your Questions simply because it exists.

The reasons for this, though misguided, are simple enough:

Detractors have rightly pointed out that the product’s versatility may in fact lead it to be too many things to too many people – especially for those who aren’t yet clear about what they want it to do. SharePoint supports so many capabilities that it is too easy to leave this question open-ended. So the better informed you are about your organization’s needs, the better results you will get – a statement, by the way, that is true for any technology solution, not just SharePoint.

Take My Forms — Please
Let’s take forms and forms-based applications as cases in point. Considered by users to be necessary nuisances at best, forms exist virtually everywhere and are perhaps the least sexy implementations in the panoply. As such, they tend not to ignite the imagination of the IT professionals and financial executives who bear ultimate responsibility for their deployment.

The problem is that forms are simply too important and too expensive to shirk, ignore, or eliminate. Many enterprise solutions and most consumer-facing applications use them as front ends to databases, data presentation mechanisms, or both – and lifecycle costs (design à archiving) can be as high as $75,000 per form. So it’s not enough to declare them “annoying” and push them to the side. Rather, they represent surprisingly significant amounts of expense – and thus surprisingly significant opportunity for savings as well.

InfoPath to the Rescue – But There’s a Catch 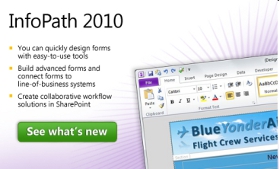 Easing forms-related pain is where InfoPath comes into play. Microsoft’s entry in the electronic forms sweepstakes, InfoPath serves as SharePoint’s “official” e-forms capability. Steeped in XML, it supports several especially useful tasks that the company is proud to specify:

These benefits lead Microsoft’s list of InfoPath attractions, and in fact, there are no issues to be had here. However, another batch of items on the list come with a ‘catch’:

The Hidden Gems
Microsoft rounds out its Top Ten list with two items that may well be the crown jewels of forms functionality: